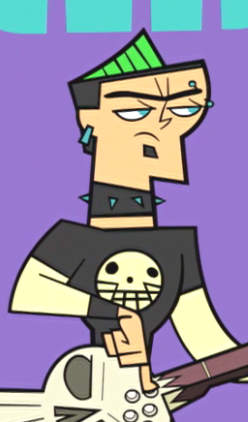 Something tells me that he isn't supportive of the system...
Advertisement:

There are certain hairstyles that are strongly associated with delinquent or punk behaviour — mohawks, pompadours, certain spiky styles, and a completely shaven head. Usually, this is accompanied by hair dyed unusual colors, in itself often considered a sign of delinquency — in the West, this means colours such as blue, pink, green, and similar shades that don't usually appear in nature. In other cultures, where hair shades are typically more similar from person to person, this can include hair tinted or lightened to red or blonde as well.

In Japanese and other Asian works, this may have something to do with repression of individualism in Asian schools — most evidently in Japan. Of course, this can lead to unfortunate misunderstandings with people who naturally have lighter hair colors. In Western cultures, unusual hair colors are less strongly associated with delinquency than they were in the past, though they are still more commonly worn by teenagers and young adults than by middle-aged or older people. However, the stigma with certain hairstyles remains, so you would probably still be hesitant about bringing home a punk with a blue mohawk to your parents.

Outside of contemporary times, dyeing hair was still significant, but for different reasons. Less than a century ago, dyeing hair at all was considered a sign of badness because it was dishonest. This is why evil blondes in period fiction are often dyed. In Restoration England, natural blondes commonly dyed their hair darker because everyone would think they had dyed it blonde in the first place. (This was partly because of the dangers of earlier dyes: dyeing your hair risked your health for temporary good looks.)

As for shaved heads and shaved hairstyles in general, these are adopted by punks and delinquents of all stripes in part as a form of intimidation. In addition, since having hair is considered the norm in most societies (especially for younger people, hence why Prematurely Bald is almost always linked to Baldness Angst), shaving one's head bald can be seen as a rejection of mainstream standards of beauty and conduct. This is especially the case for women because of the gendered expectations for women to have hair, particularly long hair, as a signifier of their femininity.

For cases of hair dye by itself marking someone as nonconformist (as opposed to a lawmaking troublemaker), see Nonconformist Dyed Hair. A common attribute of The Quincy Punk, subtrope of Face of a Thug when it's natural. If the hair keeps being re-dyed, it overlaps with Kaleidoscope Hair. Compare Makeup Is Evil. See also '50s Hair and '60s Hair, relating to pompadours.