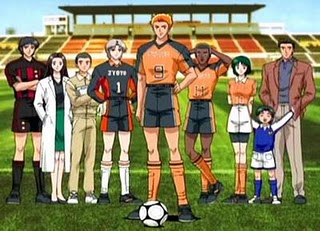 They are all friends of the ball!
Advertisement:

Hungry Heart: Wild Striker (ハングリーハート WILD STRIKER) is the anime adaptation of the 2002 Hungry Heart soccer manga. It was done by Yoichi Takahashi, the creator of the more well-known Captain Tsubasa.

The story follows Kyōsuke Kanou, a high school student who once dreamed of being a soccer player. His older brother Seisuke, an already famous player, is the one who trained him and taught him all he knows. But after Seisuke left to play in Italy, people started comparing the siblings and that plus a life-wreaking discovery about himself made Kyōsuke's self-esteem plummet, making him quit sports altogether.

After transferring to a new school, Kyōsuke has a fateful meeting with Miki Tsujiwaki, a Passionate Sports Girl from the girls' soccer team. He at first coaches Miki's team but later he checks on the boys' team and joins it, befriending the goalkeeper Sakai Jefferson Kouji and the scorer Rafael Rodrigo del Canto. With their help and Miki's support, he begins to rediscover his passion for the game...

Hungry Heart could be called a more down-to-earth and mature version of Captain Tsubasa with some Slam Dunk mixed in between. Just to name a few points, the protagonist Kyōsuke is not as Ace-ish as Tsubasa (and the actual ace is his brother), his love interest Miki was more outspoken than Sanae, a little bit more of drama is included, less important players are still relevant to the outcome of the match and the maneuvers are a lot less exaggerated. On the other hand, though, it makes use of visual gags and occasional Super-Deformed, which Captain Tsubasa never really used.

Unluckily it was a lot shorter than its Spiritual Predecessor, having only reached the 6th volume of the manga, and the 52nd episode of the anime. The series has a became very popular in Latin America (most likely due to LatAm appreciation of Soccer and how many times Animax LatAm reran it), following the trend of other obscure series like Dotto! Koni-chan or Ghost Sweeper Mikami.