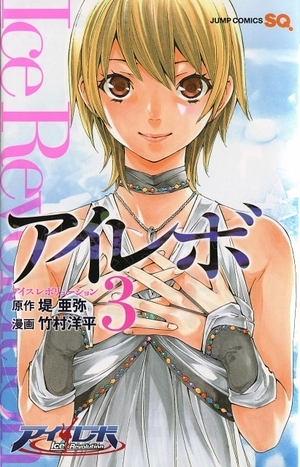 For years, Oosawa Masaki hasn't been seen as a girl. Raised along with three brothers in her demanding father's karate dojo, practicing nothing but karate and going to school in her brother's uniform when her own uniform is delivered late, Masaki is basically a tomboy... Only now that she's in middle school she really doesn't want to be a tomboy anymore. What she really wants is for the boys to acknowledge she's a girl, and hopefully be attracted to her. But how is she supposed to accomplish that in a totally macho environment without any maternal guidance?

Then she almost got hit by a truck. This would have ended her suffering... if a handsome boy hadn't saved her. Overcome by shyness she flees without even asking his name but not without noticing the odd-looking bag he was carrying. Later she notices that her classmate Saaya also carries a similar bag so she follows her to... an ice-skating rink. It's a skate bag, and Masaki is soon captivated by the way cold, distant Saaya becomes a lovely vision on the ice. Can the mannish Masaki transform into the sweet, lovely girl she wants to be through figureskating?

A manga written by Aya Tsutsumi and illustrated by Youhei Takemura, Ice Revolution or I-Revo as it was known ran in Jump SQ magazine from 2008 to 2009. The manga was cut short after 13 chapters, which were compiled into 3 volumes.