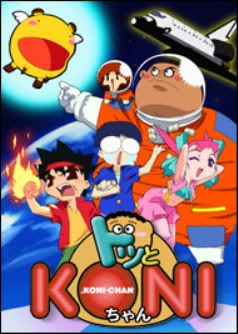 Characters roles, from left to right:note  (let's not count the mascot from the movie) Top: Comic-relief, Gary Stu. Bottom: Hot-Blooded Iron Woobie, The Scrooge ,Ms. Fanservice
"It's something weird and bizarre what's coming up next
(Something never seen before!) note Widget Series were uncommon

in Latin America
But if you are smart enough you will comprehend this part
(Even the sanest person, here insane has gone)
What it's right, here could be wrong
Because in this world, nothing is normal
It's sensational!"
— Latin American Dub Intro song

Dotto! Koni-chan is a Widget Series directed by Shinichi Watanabe. It originally aired on Animax between November 26, 2000 and May 29, 2001. It was animated by Studio Shaft and produced by Animax and Genco.

The story - as it is - involves the title character Koni and his gang having lots of crazy and incoherent adventures (from fighting with their 'Lovely Teacher' to kicking a can, dealing with samurai fish, driving a taxi, or saving the world) in their equally crazy world. It has No Fourth Wall, and lots of Lampshade Hanging and Parodied Tropes.

The cast consists in five main characters that deconstruct known tropes: Koni is The Ace, High is your usual Hot-Blooded anime hero (who is always suffering one way or the other), Moro is Ms. Fanservice with some sort of crush on Oblivious to Love Koni, Nari is a self centered rich guy with a fixation for rounded things (therefore, with Koni), and Afro the dog, yet another self-insert of Shinichi Watanabe.

Practically unnoticed in its country of origin, the series was a hit in Latin America, especially in Mexico, Chile, Colombia and Argentina. This is probably due to its outstanding localized translation note to give an example of localization, on one chapter they sing The Ketchup Song

, which can be easily compared to what American Dubbers did with Samurai Pizza Cats.

Being just an obscure Gag Series in Japan, the LatAm dub turned into a cult-classic and is more generally appreciated by fans. For reference, there is more information on the Spanish version of The Other Wiki about this series than the English and Japanese wiki combined.

The LatinAmerican Dub provides examples of: