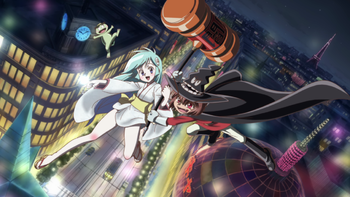 One of the very few images from this series that actually is safe for work.
Advertisement:

The core concept of the series remains the same as its predecessors: Enma the demon prince, Yukiko-Hime the yuki-onna, Kappaeru the kappa, and Chapeau-jii the...er, sentient hat walk the Earth, hunting down and capturing (or killing) various youkai that have escaped hell. However, unlike its predecessor — 2006's Demon Prince Enma — Burning Up tones down the former's horror and suspense elements in favor of returning to the manga's comedic (and ecchi) roots.

The series was licenced by NIS America, and can be streamed legally on Crunchyroll.