Loves the Sound of Screaming 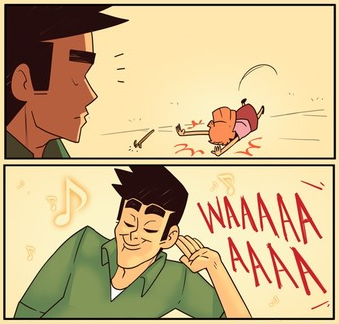 A melody of angry growls
A counterpoint of painful howls
A symphony of death, oh my!
That's my lullaby!
— Zira, The Lion King II: Simba's Pride, "My Lullaby"
Advertisement:

Some people find happiness in hearing a peaceful stream, or the laughter of children, or maybe a beautiful symphony. Others... not so much. Sometimes you'll find people who very openly find joy, solace, or at least, familiarity, in the sounds of suffering and violence.

Expect this trope to crop up if there's a torture scene, particularly if someone's being Interrogated for Nothing. If the victim is The Stoic, The Spock, or Defiant to the End, they'll probably resist giving their captor the satisfaction. (On the other hand, torturing someone Too Kinky to Torture would be the biggest letdown.)

Usually a sign that the person you're dealing with is a Psycho for Hire, or at the very least a Sadist (it's not exactly a heroic quality). These types may be prone to Reminiscing About Your Victims. For characters who actually feed off of feelings of suffering, see Emotion Eater. Related to Bad is Good and Good is Bad.

Ursula then goes on and directly says that "It's an aphrodisiac." Disney villainesses are surprisingly kinky.

Alternative Title(s): Loves To Hear Them Scream, The Sound Of Screaming