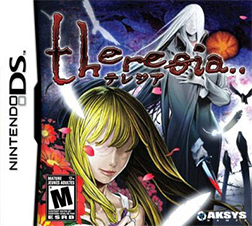 "The dignity of the dead or our own lives. Which do you think is more important?
Beautiful things are ugly, and ugly things are beautiful.
We are fools and saints."
— Maylee
Advertisement:

You wake up inside a dark, creepy, abandoned facility. You've lost your memories, there are traps everywhere, and bodies are turning up left and right. The only starting clue you have to your identity is a single name, ominously written in red: Theresia.

Theresia: Dear Emile is a Survival Horror game for the Nintendo DS. Players take the role of the story's protagonist and must navigate through a complex facility, progressing further by solving puzzles and utilizing various tools, all while avoiding numerous hidden traps. In addition, players must gather clues that will help them recover their lost memories.