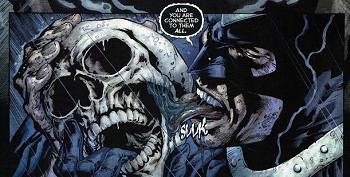 What horrifies the one may entice the other.
Tai: I like the glow of Locust blood in this light.
Dom: ...You've got a sick mind, Tai.
— Gears of War 2
Advertisement:

This character is happily intrigued by whatever is strange, dangerous, disturbing, and/or frightening. If this character is "part of The Team", their fellows may regard them oddly. Indeed, what's Nightmare Fuel or Squick to other characters could very well be a fetish or Squee to this character. For example, a Nightmare Fetishist may consider Halloween their favorite holiday, harbor an obscure or oddly specific kink, think that the monsters they're supposed to be fighting are cute, or simply be born with this trait as part of their species or family.

In wackier portrayals, a Nightmare Fetishist might also be repulsed and horrified by things most people would consider wholesome and tame. Possibly as a good version of Bad is Good and Good is Bad (though evil characters can be Nightmare Fetishists as well).

This kind of person is very difficult to coerce or break through the usual methods; as they can be Too Kinky to Torture or Too Spicy for Yog-Sothoth. Note that this trope is a sliding scale that does not always include a literal, sexual fetish; Nightmare Fetishism can range from a harmless fondness for morbid stories to a literal sexual fascination with the life-threatening.

Gustave Flaubert said that "One mustn't look at the abyss, because there is at the bottom an inexpressible charm which attracts us." In this case, people who find a very strong aversion to someone or something will slowly become desensitized to it and may even eventually develop an interest in it.

When the rich kids from The Hills try to attack the kids in The Valley by setting their clubhouse ablaze, Creepy Susie is thrilled at the prospect of being burned alive.

When the rich kids from The Hills try to attack the kids in The Valley by setting their clubhouse ablaze, Creepy Susie is thrilled at the prospect of being burned alive.