Video Game / Welcome to the Game 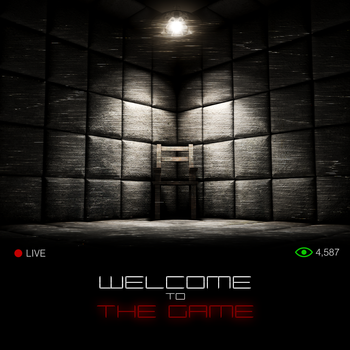 THE SHOW STARTS IN 30 SECONDS
Advertisement:

Welcome to the Game is a puzzle-based horror game developed by Reflect Studios, the same lovely people who brought us Rides With Strangers. It was released June 15, 2016 on Steam.

The game follows a Featureless Protagonist browsing The Deep Web, a real-life digital Wretched Hive, in search of a Red Room, a live streaming service hosting actual Gorn. To find the Red Room, the player must find 8 pieces of the url scattered around the web, all while avoiding the Kidnapper who is after them, and (as of ver 2.9) the Breather, a Serial Killer who goes after people browsing the Deep Web.

On November 11, 2016, the game's content sum was almost doubled with the 2.0 update, adding, in addition to the new villain, 30+ more websites, new mechanics, achievements, and a duo of Harder Than Hard to unlock secret endings.

A DLC for this game titled The Waiting Room was released about a year and a half later, serving as a prelude to the sequel. In it, you play as a captive in the Red Room, who must go through the Deep Web to find and decrypt 6 hashes, then enter them as one code to escape, all while making sure the Executioner doesn't catch you.

See also Welcome to the Game II, the sequel.

open/close all folders
Welcome to the Game
Advertisement:
The Waiting Room