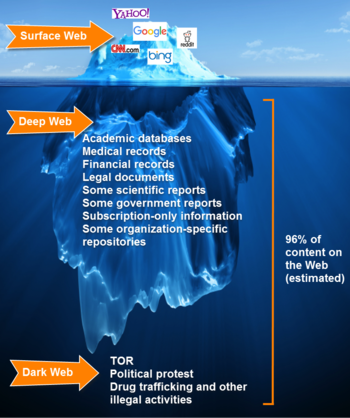 The terms "Deep Web" and "Dark Web" are very commonly confused with one another, though for understandable reasons. The Deep Web is the part of The Internet not indexed by conventional search engines. Meanwhile, The Dark Web refers to Internet content specifically rooted in allocated IP space known as darknets. Put simply, all Dark Web content is on the Deep Web but not all Deep Web content is on the Dark Web. The Deep Web is an extremely broad umbrella term (heck, even privated stuff on social media technically qualifies as Deep Web content) while the Dark Web just a small slice of it.

With those clarification formalities out of the way, now for a quick history lesson. On September 22, 2002, US naval researchers released The Onion Router, or Tor, to the world, a software that conceals the user's IP address and keeps them anonymous. Its intended usage was just to protect the identities of American cyber-spies operating in foreign countries like China without being traced, but its developers realized that doing anything under a Tor IP was as much of a Paper-Thin Disguise as having a ski mask on in public to protect one's identity. Tor was eventually distributed amongst the public to mitigate this problem, who have since took to using it for... other things.

The Dark Web is an underground network with quite the reputation thanks to its mysterious and elusive nature. Over the years, it's accumulated a good number of urban legends and rumors, almost always horror-based (Creepypasta, basically), and for good reason. Criminals and other sickos tend to take advantage of its hard-to-trace, anonymized atmosphere and use it to stash their illegal content, like shock videos, snuff films, gore, child pornography, digital black markets, criminal service advertisements, scams, viruses, hacking, all sorts of nasty stuff. Some of them do it out of genuine depravity while others do it simply to cement the Dark Web's hellish, boogeyman reputation of a Wretched Hive and add fuel to its fearmongering fire. That being said, browsing it does put you at risk. Hackers can and will acquire your IP address and dox you if you aren't taking proper security measures, and just like the surface web, you should be mindful of the websites you visit in case of malware.

Its urban legend-status has begun to reach into media and entertainment, good examples being horror films like Unfriended: Dark Web and horror games like Welcome to the Game. One of the most infamous video-games of all time, Sad Satan, also allegedly originated from a forum on the Dark Web.