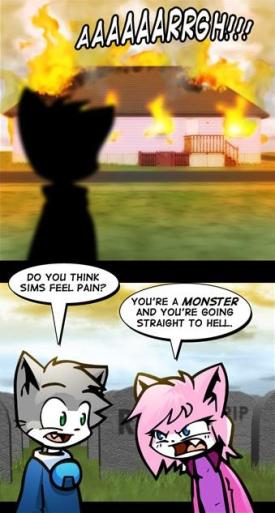 Leo is a cruel god.

You Monster!
"Because let's face it, puddings don't count as people. Puddings are useless subhuman blobs that exist solely to be bashed into an acceptable shape via Master Controller or eternally tormented and killed for the amusement of the sim gods looking down from on high."
— MinghamSmith, on The Sims 3
Advertisement:

A subtrope of Video Game Cruelty Potential, this deals with games where the unseen God-like player character can manipulate the in-game universe in such a manner that those little digital souls suffer as much as virtually possible. Want to be The Caligula? Like doing things For the Lulz and Evulz? Want to prove to everyone you are the God? Your sickest dreams have come true! You Bastard! You Monster!