He Knows About Timed Hits 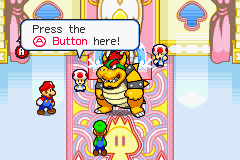 "To check your map, you should... How do I put this? Fill your right index finger with a wish. Or strength. To put it another way, I guess do something R-Button-ish?"
— Mapson, Mother 3

There are some games where the tutorial is done by Breaking the Fourth Wall and the instructions for the button presses come right out of the character's mouths.

This is largely because giving a tutorial to a player in a game is not particularly easy to do well. Even many better-done Justified Tutorials have to resort to Painting the Medium via on-screen text or the like to get across the fact that you must push button X to do action Y. So sometimes the game just admits it's a game.

Now, whether the characters continue to have Medium Awareness after this will vary, but this is done usually when the game isn't that serious and already loose with the Fourth Wall. Sometimes, especially if the game is multiplatform or has multiple control schemes, the instructions will use the button's function as its title to cover all the bases, resulting in bizarre scenarios where you are told to "press the Fire Button to shoot!".