Video Game / The Company of Myself 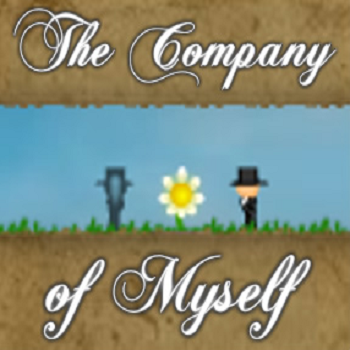 If you have a minute, I'd like to tell you a bit about myself....
Advertisement:

The Company of Myself is a 2009 Puzzle Platformer made in Adobe Flash, which tells the story of a hermit who lives in a green, grass-filled world. He is the only human left for unexplained reasons, but there was once also a woman whom the main character loved. The objective of the game is obviously to reach the goal point, but unlike other platformers, the character achieves this by duplicating his very actions with the simple act of pressing the spacebar. Thus, he can create a doppelganger that will assist him with his adventures. He will be needing them later in the game.

The Newgrounds version can be found here

. There is also a 2012 prequel, called Fixation

, which focuses on a different character, but the hermit plays a significant role.

I am aware of the tropes that populate this online game, so I wish to list them below:

The prequel, Fixation, has these tropes: