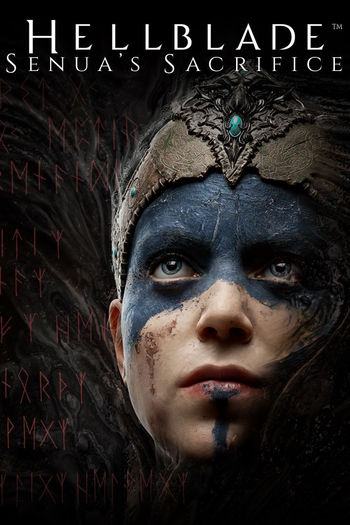 "The hardest battles are fought in the mind."
"Hello, who are you? ...It doesn't matter. Welcome. You are safe with me. I'll be right here, nice and close so I can speak without alerting the others. Let me tell you about Senua. Her story has already come to an end but now, it begins anew. This is a journey deep into darkness. There will be no more stories after this one. Look around and you will see them. The drowned, the sick, the slain. Here they lie, rotting in the field and river of Hel. But the dead don't always lie still here. This is not a place of rest. What is she thinking? I can tell you. She is afraid. Wouldn't you be? You'd think she would get used to it by now after so many years. But the darkness it just builds onto itself, growing stronger, towering over her. You might try and ignore it, turn away, but it's always there just out of sight, where you are most vulnerable. It's like it knows that just enough light is all you need to see its suffocating power..."
— Opening Monologue
Advertisement:

Hellblade: Senua's Sacrifice is an Action-Adventure Video Game developed and — for the first time — published by Ninja Theory.

Based upon Celtic and Norse Mythology, the game tells the story of the eponymous Senua, a warrior traumatized by a Viking invasion, as she embarks on a very personal journey through a hellish underworld which are the psychosis manifestations of her own reality and mind.

The game is somewhat similar to the Soulsborne games in terms of combat, focusing on timing your strikes and dodging the enemy's blows. Be warned, as Senua can't take many hits before she goes down.

A sequel, Senua's Saga: Hellblade II was announced during the VGA Awards on December 12, 2019, for the Xbox Series X. Watch it here

. A gameplay demo was released a year later and can be viewed here