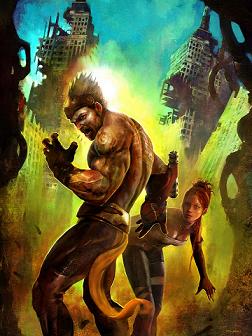 Enslaved: Odyssey to the West is an Action-Adventure Video Game developed by Ninja Theory. The game is published by Namco Bandai and out for PlayStation 3, Xbox 360, and Microsoft Windows.

Enslaved is a story set one hundred and fifty years in the future where a global war has devastated the Earth. In this future, nearly the entire human race has been eradicated, but robots still plague the land. Although they are from a bygone era, they are still following their orders to eradicate the humans. The storyline is loosely based on the ancient Chinese novel Journey to the West.

The main character of the game, Monkey, is a lone wolf who's spent his entire life running from the machines. Eventually, Monkey is captured by the death machines, where he is placed on an airship for transport to the city of Pyramid. It is there that he meets a technologically adept woman named Trip. Trip manages to escape, unintentionally freeing Monkey in the process. He follows her in an effort to get to an escape pod, but she takes the last one and refuses to let him in. He clings to the pod as it launches and is knocked unconscious in the landing. When he comes to, Monkey finds that Trip has placed a slaver's headband on him in order to compel him to help her get home. She explains that she has hacked the headband so she can give him jolts of pain at will; and further that if Trip's heart ever stops then the headband will kill Monkey outright. As they try to make their way back to Trip's village they must fight robots that have been lying dormant for years. The two of them have a strained relationship at first, but in order to survive this perilous world they need each other's help.

The main game and its DLC contain examples of the following tropes:

open/close all folders
Enslaved: Odyssey to the West
Pigsy's Perfect 10