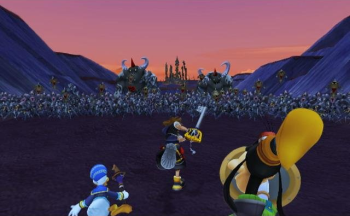 And you get to fight each and every last one of them.note  Except not the two Behemoths, thanks to hardware limitations, but you do still get to kill an even 1000 of the mooks
"Hear me, my hordes! The spell is nearly complete! Until then, you WILL keep that whelp from interfering with my ritual. I don't care if the whole lot of you get lodged on the end of his blade. You will buy me the time I need! Do not fear him... Fear my wrath if you fail me!"
— Lord Ghirahim, The Legend of Zelda: Skyward Sword
Advertisement:

Stage of a game where the enemies begin to come out in huge droves, typically near the climax. May be part of a Zerg Rush. Increasingly common as systems have become more powerful, as it requires large amounts of sprites or polygons on screen at once. The War Sequence can cause a kind of Fake Difficulty, but looks impressive and is so fun to beat (even if it's not required you beat everyone) that that's overlooked.

If you're lucky, there may be a near-equal force on your side as well, making it more of a true battle and averting One-Man Army at the same time. You'll probably be expected to carry the weight of the battle on your own, though... However, a character who beats a War Sequence without backup usually qualifies as a One-Man Army. Conservation of Ninjutsu usually means that the player has a relatively easy time wiping out the mooks. If not, it can easily become That One Level.

In the worst case of One-Man Army scenario, the War Sequence would be The Last Dance, which you have to stay alive as long as possible, you're likely to be overpowered by the swarm and die in a heroic manner, but, there is nothing to regret.

These are likely to be the best levels ever.