Video Game / The Lord of the Rings: The Return of the King 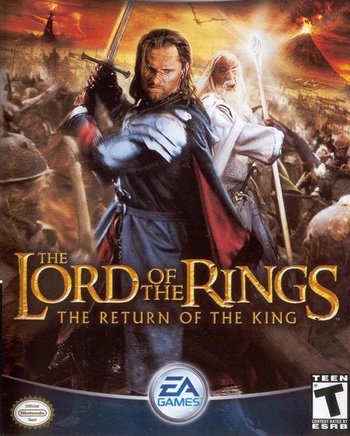 "We must hold his gaze long enough for the unthinkable to become real. For hope to conquer all."
— Gandalf
Advertisement:

All spoilers for the films are unmarked. Read on at your own discretion.

The Return of the King is an action game made by Electronic Arts, based on The Lord of the Rings film trilogy. The gameplay is mixed with introductory and ending scenes from the films themselves.

In the Path of the Wizard, Gandalf kills the remaining orcs and Uruk-hai at Fangorn forest, and helps Barbol to release the river. Then he is off to Minas Tirith, first helping to keep the orcs from the ramparts, and then helping people to escape to the inner walls.

In the Path of the King, Aragorn, Legolas and Gimli (the player can play any of the 3) roam into the haunted mountain to recruit the help of the dead, and then join the final battle at Pelennor Fields.

In the Path of the Hobbits, Sam, Frodo and Gollum (non-playable) escape from Osgiliath. In the next two ones, Sam is alone, first in Shelob's lair, and then in Cirith Ungol.

The Wizard and the King join forces and face Sauron's armies at the Black Gate, and Frodo fights Gollum at Mount Doom. And you know what happens then, don't you?

Alternative Title(s): The Return Of The King