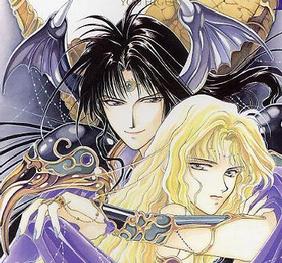 Seimaden is a Shōjo series by Higuri You, first published in 1993 and spanning 10 volumes plus a one-chapter prequel. The art style is somewhat remiscient of CLAMP's RG Veda, as both were published by the same company.

It tells the story of Laures, who became a demon to save his wife, Alice. He was tricked and Alice died, and he vowed to live long enough to meet her reincarnation.

Once this finally occurred, things got a little strange. He found her during a war between the demons and a human tribe, the Azel people. He meets Hilda once as a toddler, then leaves her, and the ongoing war, again. When the kings of the Azel and the demons fight each other, they are somehow sucked into their swords. Laures takes the Azel sword with Kaimei's power in it, and the war ends. He seals the demon world off and regularly stalks little Hilda. He sees that she is developing a bond with Roderique, whom he senses bad things will happen to in the future regarding the Azel power.

Realizing that the most logical course of action is obviously to not keep the Azel sword safely in the sealed demon world, Laures responds to this potential threat by exterminating the Azel, wiping Hilda's memory of her past and sealing the Azel sword inside her before sending her off to wander the world. However, Roderique is still alive, and he desperately seeks Hilda and the power of Kaimei. When he finds them both in one go, he is Demonically Possessed, and things go downhill from there.

Around this, there is the typical melodrama that can be expected, lots of Bishōnen and a plot that is often unclear.