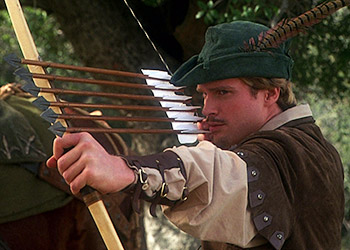 How do you show a Master Archer to have Improbable Aiming Skills? Have him loose multiple arrows at once from the same bow! Who needs Automatic Crossbows when your archer can kill five people at the same time?

While technically possible in Real Life, it is very difficult to aim and loosing two arrows would cut the force behind each arrow in half, ruining the range and impact. Shooting more than one arrow only appears in fiction, as loosing n arrows means a force of 1/n, quickly putting you in Annoying Arrows territory.

Subtrope of Bows and Errors. Compare with the Automatic Crossbow. One of the variants of the Spread Shot.

"Tennessee Kid" Cooper's cane Ol' Blue is a six-shot revolver that, with his Crackshot Technique, he can fire all at once.

"Tennessee Kid" Cooper's cane Ol' Blue is a six-shot revolver that, with his Crackshot Technique, he can fire all at once.