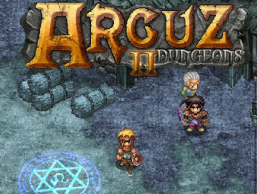 Arcuz is a Flash-based web game by indie developer FUNNAUT. The story revolves around an Undefeatable Little Village known as Arcuz, which the hero must protect from monsters. It gained popularity when posted on Armor Games.
Advertisement: