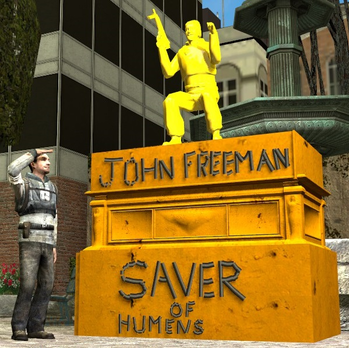 He helped his brother to defeat the enemys. Lest we forget.
Geordi La Forge: In the future, this whole area becomes a historical monument. You're standing almost on the exact spot where your statue's gonna be.
Zephram Cochrane: Statue?
Geordi: Yeah! It's marble, about twenty meters tall, and you're looking up at the sky, your hand sorta reaching to the future.
— Star Trek: First Contact
Advertisement:

A character is dead, either before the story has started or they died during the story. To honor their memory, other characters raise a statue to them so they will always be remembered.

The reasons for the statue being raised can vary. The character may have heroically died saving somebody else, dedicated their lives to the greater good, created a successful organization or something else.

Of course, there are occasions where the individual in question just might turn out to still be alive. Often these then become an Embarrassing Statue.

As a Death Trope, there will be unmarked spoilers ahead. Proceed with caution.

Compare with War Memorial, which focuses more on the event rather than specific individuals who died. Contrast Dishonored Dead, where the dead person is condemned rather than remembered fondly.

"Gone But Not Forgotten"

While in the future, Danny learns that after the fateful Nasty Burger explosion, his family and friends received a memorial. Mr. Lancer...not so much.

"Gone But Not Forgotten"

While in the future, Danny learns that after the fateful Nasty Burger explosion, his family and friends received a memorial. Mr. Lancer...not so much.