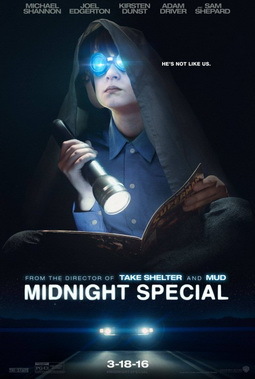 Midnight Special is a 2016 sci-fi/chase movie written and directed by Jeff Nichols.

Alton Meyer, an 8-year-old boy with supernatural abilities, has been reported missing. In reality, his father Roy, along with Roy's lifelong friend Lucas, have taken the boy from the religious compound where he previously lived and gone on the run. Meanwhile, they are being pursued by members of the religious sect and agents of the FBI and NSA, both of whom are pursuing Alton for their own ends.

The movie stars Michael Shannon, Joel Edgerton, Kirsten Dunst, Jaeden Lieberher, Adam Driver, and Sam Shepard. It was given a limited release beginning on March 18. Trailers can be seen here

Tropes Present in this work include: