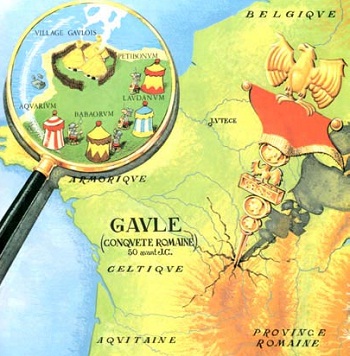 The year is 50 B.C. Gaul is entirely occupied by the Romans. Well, not entirely... One small village of indomitable Gauls still holds out against the invaders. And life is not easy for the Roman legionaries who garrison the fortified camps of Totorum, Aquarium, Laudanum and Compendium...
— Opening of every Asterix book
Advertisement:

It is such a friendly, peaceful little place.

In spite of being surrounded by the big malevolent empire, and technically being at war with it, the village is not the least bit warlike or aggressive. Yet the empire keeps sending its great legions, and the little village keeps crushing them all as if they was simply swatting flies. Perhaps it is a Town with a Dark Secret, or populated by Badass Crews, or maybe a Knight Errant visited in the past and took to Training the Peaceful Villagers. Whatever the reason, it's practically invincible.

While the "village" can be some other form of small civilian community (a block in a city, for example), it must still be small and civilian. Military outposts do NOT count, and neither do entire cities or full sized countries. So, no, 300 is not an example.

While the "Empire" can be some other form of huge monolithic force (a megacorporation or international crime syndicate, for example), it must still be huge, powerful, prone to violence, and known for conquering all in its way. A single country, normal corporation or criminal gang will not do.

Compare Hidden Elf Village, which stay independent through not getting detected instead of crushing all the hordes the empire sends against it. Compare and contrast The Remnant, which is rarely depicted heroically. Also compare David Versus Goliath. Frequently caused by a Superweapon Surprise.