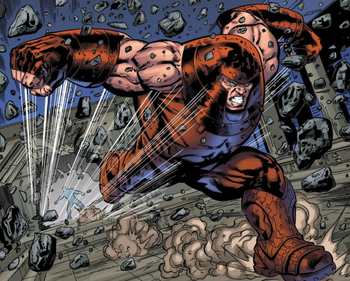 He's just picking up steam!... and rubble, rebar, glass shards, a body count, groceries...
"He was never motionless or in the same place an instant; springing, side-stepping, whirling, twisting, he offered a constantly shifting target for their swords, while his own curved blade sang death about their ears."
— Conan the Barbarian, "Xuthal of the Dusk"
Advertisement:

The Lightning Bruiser is an Archetype that sets itself apart from the competition in that it is able to take and give a lot of damage and can move quickly. When considering strength, speed, and toughness, the Lightning Bruiser does not trade off one advantage for another the way, say, the Fragile Speedster trades off durability for speed, the Glass Cannon trades durability for power, the Stone Wall trades offense for defense or the Mighty Glacier trades mobility for power.

To prevent the character from becoming a Game-Breaker or Story-Breaker Power, the Lightning Bruiser may have weaknesses beyond strength, speed, and toughness: a lack of range, technique, intelligence, magical capability, or magical resistance are some of the challenges these characters can face, as would be a high resource cost that prevents them from seeing much use. Sometimes, the Lightning Bruiser may be balanced by being less interesting than its counterparts: it hits fast and hard, and it can take a punch, but it doesn't do much else. In fighting games, they are typically balanced by poor or situational approach options and inadequate or nonexistent defensive options; they struggle to actually get in, and they can take a hit, but they can't do much to keep themselves from getting hit. If it's a strategy or MOBA title, they typically either plateau at higher levels or start out weak, and usually have minimal utility or kits that don't lend themselves to alternative roles. If it's a game that incorporates Combat, Diplomacy, Stealth, they may be locked into combat and rely on their teammates to fulfill the other niches. On the other hand, The Hero might be one of these, and is simply much more powerful than everyone else. Lightning Bruisers are relatively common as video game protagonists for this very reason - it explains why they're capable of taking down hordes of enemies single-handedly.

Either Faster Than They Look or Stronger Than They Look may apply if the Lightning Bruiser looks more like a Mighty Glacier or a Fragile Speedster, respectively. The resulting surprise factor is useful for getting an edge on unsuspecting opponents.

Like the Fragile Speedster, the Lightning Bruiser is well-suited to Confusion Fu; unlike a Fragile Speedster it can also use a more direct approach without needing to rely on Hit-and-Run Tactics to stay safe. The classic Flying Brick Super Hero archetype is usually a Lightning Bruiser. Compare and contrast Acrofatic and Master of All, with which it may also overlap. Compare and contrast also Jack-of-All-Stats, which is similarly well-rounded but not exceptional in any particular area in the way a Lightning Bruiser is.

When adding examples, keep in mind: This trope only exists relative to other characters in universe. A statement that a character is strong, fast, and durable does not define them as a Lightning Bruiser; most Action Heroes already demonstrate those qualities. A character is a Lightning Bruiser if they are explicitly stated to be stronger, faster, and tougher than most of the other characters, or if it is stated explicitly that another character of comparable speed or strength is a Fragile Speedster or a Mighty Glacier.

Note that being a Lightning Bruiser has nothing to do with using lightning-based attacks or magic, though they can overlap to the same character.

She is still the incredibly gifted and fast fighter that Tomoe was. But now she is also much bigger and stronger.

She is still the incredibly gifted and fast fighter that Tomoe was. But now she is also much bigger and stronger.