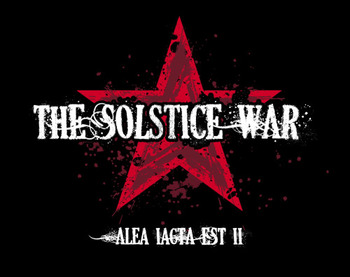 On the 18th of the Aster's Gloom in 2030 D.C.E, the continent of Ayvarta, ruled by the Socialist Dominances of Solstice, awakens to a surprise invasion by the Nocht Federation and its allies, who accuse the Ayvartan government of fomenting unrest in their nations, and who also just want to take out the commies once and for all and access Ayvarta's vast resources. Disorganized at first, the Ayvartans struggle to reequip themselves for battle, and to fight back against the grey tide. Now various characters on both sides of the conflict have some hard choices to make.
Advertisement:

The Solstice War is a Web Serial Novel about a low fantasy world going through its own version of World War II, with similar tactics, equipment, and historically parallel battles (for the most part...) It started in late 2013 as one of several other scattered pieces of fiction on author Madiha S's blog, but eventually came to dominate the page through 2014 and on. One "book" is now complete. Each update is between 10,000 and 15,000 words divided into 4-5 "scenes."

You can read the 1st chapter here.

Through 2019 the pace of updates became infrequent. In 2020 the author took down many of the chapters written in 2019, stating that they needed revision, and subsequently the story went on indefinite hiatus. However, the author has started a new work with similar themes and characters

that is updating more consistently.

The Solstice War contains examples of: