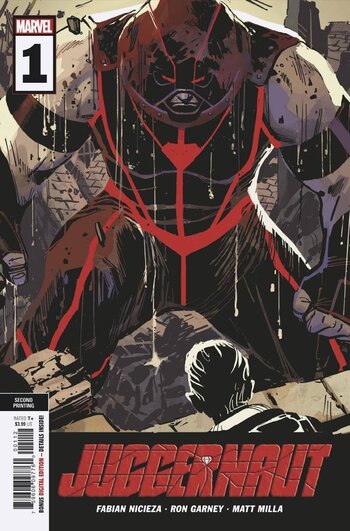 The cover to Juggernaut vol 3 #1 (second printing) by Ron Garney.
I'm done serving madmen and gods. Every choice from now on, for good or bad...is going to be mine!
— Cain Marko, Juggernaut vol 3 #4
Advertisement:

The Marvel Comics character of the Juggernaut has had two self-titled one-shots and one self-titled solo mini-series so far.

Juggernaut Vol 1 (1997) was a one-shot written by Joe Kelly, with art by Duncan Rouleau. It's about D'Spayre's sister Spite persuading Cain Marko into helping her fight her brother.

Juggernaut Vol 2 (1999) was a one-shot tie-in to the "Eight Day" event that ran through Iron Man, Thor, and Spider-Man at the time. It was written by Joe Casey, with art by Terry Shoemaker. The crossover was about eight power mystical entities who entered into a wager to determine who was the most powerful. Each entity would create a totem and the first mortal to touch that totem would be embued with the entity's power — and, of course, Cyttorak was one of the eight mystical entities and the Juggernaut his champion.

Juggernaut Vol 3 (2020–2021) was a five-issue mini-series written by Fabian Nicieza, with art by Ron Garney. Cain Marko is done with being a bad guy. He's recovered from being depowered and, even though he can't go to Krakoa, he knows he can do some good working for Damage Control. But when he meets a young girl who goes by D-Cel, he'll have to face his past and figure out what his future really holds. Nothing can stop the Juggernaut — except himself.

His story arc involving the Warden and D-Cel concludes in X-Men Unlimited where he teams up with Deadpool in that story arc.