Visual Novel / Aselia the Eternal - The Spirit of Eternity Sword 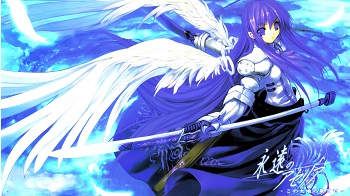 The typical harem opening starts up with our protagonist, Yuuto, a teenager who was adopted by the Takamine family after his parents died. Later, his adopted parents died, leaving him to raise his non blood related little sister. After the initial angst is dealt with, it moves into more haremy territory with the introduction of Kaori, Kotori and Kyouko, who all seem to have crushes on Yuuto. Later, he has a strange meeting with a mysterious miko.

It's all advancing nice and well, looks to be a nice dating sim... and then Yuuto and Kaori are dramatically dropped into another world, where he is stabbed by a girl with wings and saved by another girl. Following this, he's nursed back to health by a gentle young woman whose language he does not even recognize and eventually turned into a slave soldier, forced to wield the sentient eternity sword 'Desire' which tries to force him to kill, maim and rape in its quest to destroy its enemy, 'Oath'. Yuuto is then put in charge of the national army with his sister being held hostage. Seems the king has some expansionary ambitions and thinks with Etranger Yuuto on his side that he is unstoppable. And he seems to be right.

Eien no Aselia is an RPG/Visual Novel hybrid of sorts featuring the hero Yuuto trapped in another world, forced to fight using a vicious sword called Desire. How will Yuuto keep his sanity, survive and manage to return home?