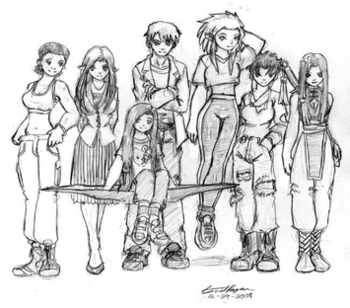 is a Cape Punk / Teen Drama Shared Universe Web Serial Novel series, in a Superhero School scenario with elements of the Cthulhu Mythos comprising the main Myth Arc. It was inspired by an X-Men: Evolution fanfic written by one of Whateley's many authors, and retains many similarities to the Marvel Universe, but a reasonably well-developed universe was created before the first stories were released.

People in their early teens are manifesting mutant powers. They are widely hated and feared, but there is a place that will take them in, shelter them, and teach them how to control their powers: Whateley Academy in Dunwich, New Hampshire. Whateley is fairly large (roughly 650 middle school through high school students in six grades); has support from superheroes, supervillains, and super-neutrals (so it is not being constantly attacked); does not have a high school aged superhero team flying around and fighting crime despite what Team Kimba seems to think; and puts heroes and villains together in everyday situations (just like a real high school). It also hosts demons, magical creatures, monsters, demigods, gods, and Jericho.

In one of many twists, between a sixth to a third of the students have a subconscious image of the form that their body ought to take, known as their Body Image Template (BIT). Mutants with a BIT generally gain either a physical or mental package of powers, frequently both. The physical package usually includes both beauty and brawn, the mental package usually includes major intelligence boosts as well as memory, etc. However, a BIT may change any aspect of a person's body in order to fit their self-image, including their sex. In some cases the transformation may turn them into inhuman whatevers right out of a horror movie.

Most of the main characters are transgender in some way, shape, or form, so the school placed them all in Poe Cottage, an LGBTI dorm. All the main characters have their own origin story, in which their powers began to manifest, and there is a great deal of grief within their families about their gender change. Of course, there is almost always grief associated with simply being a mutant, but for those involuntarily transformed, the problems are all the greater. Not all transgender characters were involuntarily forced into their present form by their mutation. Some of them changed their own sex using their powers, and some were changed by outside forces.

Whateley Universe is not a pastiche or a direct parody, although it is often written in a tongue in cheek manner, putting superhero themes on common things. For example, Whateley Academy has the high school cliques any normal high school would have, the elitist Alphas, the Fashion Police, and the grungy losers (the Rat Patrol). However, they also have other cliques that only a Superhero School would have, such as the Mastermindsnote and their 'heroic' rivals, the Intelligence Cadet Corps, the Ninjas, the Robo-Joxnote Gadgeteer Geniuses and Mad Scientists who build Powered Armor and/or robots, the Gruntsnote JROTC for aspiring Super Soldiers, the Bad Seedsnote the children of known supervillains, who are often targeted by others who think it is inborn, and of course, the Cape Squad (the 'Future Superheroes of America', who are very enthusiastic about being future superheroes). Ironically, school administration is quite insistent that Whateley is not a Superhero School, though they don't deny being an Academy of Adventure.

to the stories. Until February 2012, when Diane took over updating the main site, the authors made their new stories available at the Authors Corner section of the forums

. The front page also contains links to the forums and a fan-maintained Wiki. Be forewarned: the Whateley Universe now encompasses something like 14 Canon authors, 21 fanfic authors also hosted on the site, and something close to 150 novels, novelettes, and short stories (NOT counting all the fanfic). It is also somewhat NSFW, with rather frank discussions of sexuality in several of the stories.

Around 2014, the Canon Cabalnote the collective term for the canon authors started developing plans for a second generation of Whateley stories, and recruited several fanfic authors for a new Cabal. The first of these stories were released in late 2015. While they take place at Whateley, they occur several years after the main cast would have graduated, with an all-new team and new plotlines. As of April 2016, the first story arc has ended, though the students have yet to reach Whateley, and two of the Superhero Origin stories have gotten underway.

Because of the sheer size of the series and every-growing Loads and Loads of Characters, most of the character descriptions have been moved to the (multiple) character sheets. Only the initial main characters of the two periods are summarized here.

The new characters for the 2nd Gen stories include: