Webcomic / When Heaven Spits You Out 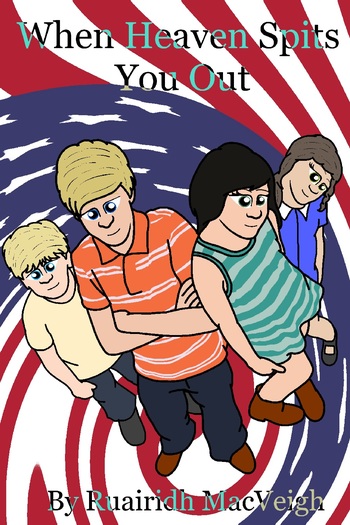 "Jesus, are you listening?"note Clockwise from left: Mark Hanson, Ryan Hanson, Janie Hanzlicek, and Natasha Hanzlicek.
"Even in the darkest hours, light comes into every life."
Advertisement:

When Heaven Spits You Out is a series of graphic novels by Ruairidh MacVeigh that follows the story of 11-year-old Ryan Hanson, who lives in the rough inner-city of Baltimore with his mother, Jinny, younger brother, Mark, and his abusive, alcoholic father, Simon. The story, set in 1971, establishes Ryan's life of poverty and sadness in the decaying city, showing the relationship he leads with his parents and brother and how he survives day-to-day while set against the background of America's economic and social decline during the early to mid-1970s - events during the course of the comic are framed using real-world events such as the Attica Prison Riot, Apollo rocket launches, actions by the Nixon Administration, etc.

Following Part 1, Ryan becomes acquainted with Janie Hanzlicek, a young and wealthy Jewish girl he meets at boarding school who was placed into his dormitory through a clerical error, and very soon she begins to help the troubled boy conquer his mental demons while also introducing him to a life of luxury, their friendship being forced to be kept a secret due to Simon's hatred of Jewish people, throwing the future they have together into doubt.

, but can also be bought through Comixology

. A novelization of the comic is also available on Amazon

, which generally follows the same plot but is told from the perspective of a 30-year-old Ryan recounting his twisted childhood, and also elaborates on some scenes which are not illustrated in the comic. There is also an audiobook reading based on the novelization, narrated by MacVeigh himself, which can be found on Audible

In November 2021, the series was joined by a spin-off series called For Love Nor Money, which follows the story of Eamonn Lees, father of Ryan's childhood friend, Peter, and takes a more mature route, being a crime drama rather than a slice-of-life series with dramatic elements like When Heaven Spits You Out.