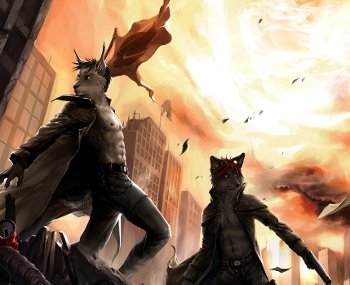 Trinton Chronicles ( トレントンの年代記 ) is a series of web-novels compiled from the message board RPG of the same name over the last 10+ years; it ran from 1999 to 2013. The main story is centered on a group of seemingly random people getting mixed up in some pretty weird situations. Eventually they form a rag-tag group based loosely on friendship or morality and, in most cases they get along fairly well.

The setting centers on the fictional eponymous city of Trinton, which acts as a center post in economics, politics, science and magic for the entire East Coast of the United States, all from the state of Virgina.

This Web Original features Funny Animal Characters who all have supernatural abilities or gifts with a few of them appearing rather weird or seemingly useless in everyday life while others get used heavily for mundane chores.

The books themselves were written in story-arc format so that each book is a separate setting with an over-all theme and variant length of pages per book, so far the trend appears to be less pages and less story. There are 4 web-books in all: Fantasia, Silence, Hallow's Eve, and Righteous Termination, — the story was Cut Short with the end of the latter one.

Had a link to the main page of the site but has since been deactivated with the closure of the site and web series. The series is being archived as of 2014 and should have its own archived page soon. Now currently has a set of fan cards based on Magic: The Gathering found via Google Docs: where the dream lives on.

. Also the archived stories can be found here

As of March, 2014 a revival novel was in the works from the creator of the series, who hopes to publish it via Amazon and Kindle soon.