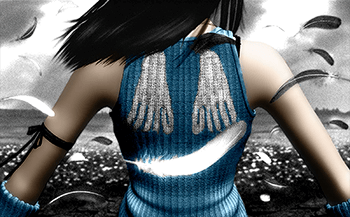 If a motif is a recurring element with symbolic significance, then obviously a feather motif is any time feathers appear recurringly in a story. They can be tied to a specific character or they may span an entire work as a whole.

Feathers have certain connotations depending on their use and color. White or glowing feathers often represent the divine because of their connection to angels. Black feathers usually represent death or even evil, not only because they are the "opposite" of white but also since they are associated with Creepy Crows, which are scavengers that feed on the dead. Peacock feathers can represent vanity or, more rarely, flamboyance. Feathers of any color may represent flight or freedom due to their association with birds. Like anything symbolic, this can also be a case of Faux Symbolism or merely there because someone thought it looked really cool.

When the motif is associated with a character, that character may have wings or feathers (both real or represented) on their clothing or accessories. In Anime and Video Games, it is not uncommon for a character with a Feather Motif to have powers that are accompanied by feathers, or using feathers as weapons, or even have fully feathered wings, although it should be noted that feathered wings alone do not make a Feather Motif.

Characters with a Feather Motif may display Perpetual Molt.