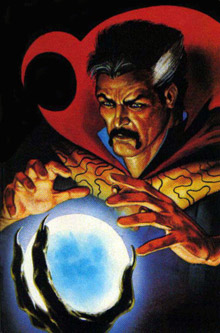 Excuse me while I save the world with this... actually I have no idea what this is.
Bandit Keith: In order to tell your future, I'll need you to give me your necklace.
Yugi: My puzzle? No way! Without it, I can't pretend to be good at card games!
— Yu-Gi-Oh! The Abridged Series
Advertisement:

Man, this guy really sucks, are you sure he's the real hero? I mean look at him, he couldn't kill a half-brained ferret if his life depended on it. Wait, what is that he has in his hand? Oh god, my arms! The pain!

Basically speaking the hero (or villain) has some sort of item (often a Power Crystal, sometimes a Magical Accessory or Ring of Power) that makes him awesome. Just having it is enough for him to take a level in badass and just tear shit up. It may be a lucky charm of some sort or be some sort of artifact or gadget that actually causes his insane upgrade. Watch out if the hero loses it however as he is undoubtedly screwed if he does (most definitely if the object has some sort of power, less so if it's a simple lucky charm) and it may make an unscrupulous bystander a Hero for a Day.

Of course, who said it had to be an object? Why don't we go nuts and make it his entire outfit? Or how about a Transformation Trinket?

It may even be an Empathic Weapon.

Say, have you ever considered a career in badass? Why not join The Chosen Many?

This trope has a common subversion in Magic Feather, in which the artifact does nothing and the concentrated awesome is all the character's own. Another related trope is Artifact of Attraction, in which the item is so appealing that multiple characters are fighting for possession of it. If the opposing side's response is to get an amulet of even more concentrated awesome, it results in Bigger Stick.

Another danger is that sometimes the Amulet of Concentrated Awesome turns out to be an Amulet of Dependency or Artifact of Doom.

The Amulet of Daylight has the power to summon the trollhunter armor and its sword, the Sword of Daylight.

The Amulet of Daylight has the power to summon the trollhunter armor and its sword, the Sword of Daylight.