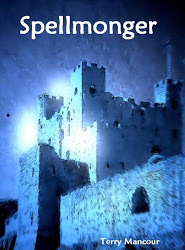 Spellmonger is the first book in the aptly named Spellmonger series, written by Terry Mancour. However, it was only published digitally in the catalogue of the Amazon Kindle store.

After Minalan finished serving his drafted time as a Warmage in the army of the duchies, He just wants to quietly settle into the life of a village spellmonger (one who sells his magic to help with ordinary tasks) in the remote mountain valley of Boval. It was a peaceful, beautiful little fief, far from the dangerous feudal petty squabbles of the Five Duchies, on the world of Callidore. Things were going very well: business was booming, he is on good terms with the local lord, the village folk loved him, he found a sharp young apprentice, and best yet, he met a beautiful young widow with the prettiest eyes . . .

Then one night Minalan is forced to pick up his mageblade again to defend his adopted home from the vanguard of an army of goblins – gurvani, they call themselves – bent on a genocidal crusade against all mankind. On top of that, the goblin shamans were armed with immense magical power; more than has been seen since the days of the ancient Imperial Magocracy – and their leader, a mysterious, vengeful force of hate and dark magic, is headed directly to Boval valley. The good people of Boval and their spellmonger have only one choice, to hole up in the over-sized Boval Castle and hope they can endure a siege against hundreds of thousands.

The rest of the series follows this smart-alecky narrator on his quest to save the world of men from the new goblin scourge, all the while dealing with the ridiculously inefficient and corrupt feudal government, the inherent distrust/ignorance of magic in his culture, his own struggle with his ambitions and social class as he grows in both magical and political power.... and his transition from horndog bachelor to faithful husband and father

Currently there are 9 full books, with the 10th on its way:

There is also a young adult companion line call the Spellmonger Cadet Series:

In addition, he has also published a number of short stories which can be found in the anthology The Road to Sevendor