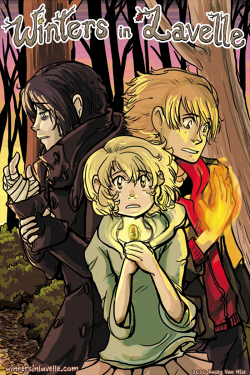 From left to right: Ashton, Kari and Aiden.

is a modern fantasy webcomic written by Kasey

. The story revolves around two young siblings, Kari and Aiden, who discover that the crystal sphere above their fireplace can transport them into a magical world. After much meddling, the family heirloom leaves them stranded in a forest. As they search for a way home, they gain strange powers, meet new people and find out more about themselves and their family. Wiki here.

When listing an example, please limit entries to things that have appeared in the comic itself.

See the character sheet for more information about the cast.

Unfortunately, the comic has been on Hiatus before chapter 10 was released and the website is offline.