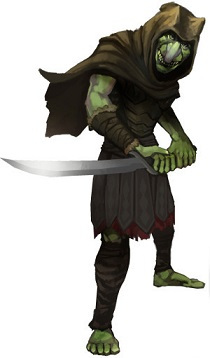 A hobgoblin from the Iron Teeth Mountains.
Advertisement:

The Iron Teeth is a free online dark fantasy story or web serial. It is written by Clearmadness, and is updated twice weekly on Sundays and Wednesdays. Each update is between 3000 and 4000 words.

Synopsis: All Blacknail the goblin ever wanted was to live a peaceful life in his sewer home, and eat as much as he could fit in his stomach. He certainly never asked to be captured and whisked away to the far off Iron Teeth Mountains. There, Blacknail is taken in and made a servant by the outlaw Herad and her crew of bandits.

Among the monster-filled forests and snow-peaked mountains of the North he will grow into something far more than a simple goblin. As the world around him slides into ruin, Blacknail will fight to survive, and learn to live with the men and women of the North. When an ancient evil rises, Blacknail will be there to meet it, and leave his mark on the world forever.

However, first he has to get over his crippling fear of trees, and survive in a place where everything considers him to be the perfect size for a quick snack…

Link to the story

The first volume of Iron Teeth is also for sale on Amazon. It contains edited and exclusive content.

The Iron Teeth contains examples of: