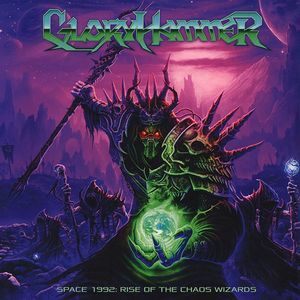 Gloryhammer are an Affectionate Parody of Power Metal, led by the vocalist of Alestorm, Chris Bowes. In this band, he plays the keyboards and the voice of evil sorcerer Zargothrax. They decided to do the usual Heavy Mithril Power Metal fare, but set it in Scotland so they didn't have to make up place names. The first two albums, Tales from the Kingdom of Fife and Space 1992: Rise of the Chaos Wizards have been concept albums, with the second one being the first one Recycled IN SPACE!. The third album, Legends from Beyond the Galactic Terrorvortex, is a direct sequel to the second that takes place in an alternate universe. The lyrics of this band are considered ludicrous even by power metal standards.

In ancient times, the evil wizard Zargothrax unleashed a wave of darkness over the glorious kingdom of Fife. However, the prince Angus McFife, a noble and true warrior with a heart of steel, survived the assault. Angus declared it his personal mission to get revenge for his kingdom, seeking out the Hammer of Glory, an ancient and powerful weapon capable of defeating even immortal beings. With the Hammer and an army of just warriors, Angus McFife defeated Zargothrax in an epic battle, freezing him in ice.

Upon arriving in the space behind the wormhole, Angus McFife XIII finds that he's traveled to an alternate past where Zargothrax has conquered Dundee, reforging it into his own dark kingdom. Also, to the horror of Angus McFife XIII, the Hammer of Glory no longer has any effect on Zargothrax. Now, the valiant hero must recharge his ancient weapon and gather a force to finally defeat the dark sorcerer once and for all... until he was suddenly kicked out of the band in August 2021 following some kind of behind-the-scenes dispute, amidst a wider controversy

involving some exceptionally questionable texts between Bowes and the remaining band members.

Their official site, where you can also BUY their albums, is here.

The American storefront is here.

For the eternal glory of Dundee!