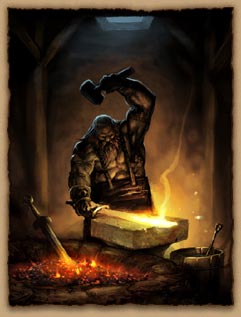 This is an iron sword. All craftdwarfship is of the highest quality. It is encrusted with Dolomite and decorated with turtle bone and cave lobster shell. This object menaces with spikes of adamantine, magma, and kitten tallow.
"Under a spreading chestnut-tree
The village smithy stands;
The smith, a mighty man is he,
With large and sinewy hands;
And the muscles of his brawny arms
Are strong as iron bands."
— Henry Wadsworth Longfellow, The Village Smithy
Advertisement:

Someone who shapes things out of iron and steel, so called because iron is a "black" metal. This craft has been around since humans first learned to shape iron and iron alloys. Metalworkers specializing in bronze or copper are sometimes referred to as "redsmiths",note A more common word historically was "coppersmith" and those that work with tin or pewter (or who finish and polish metal goods in general) are known as "whitesmiths."note Historically also "tinsmith" and "tinker", although the latter became a derogatory term for Irish Travellers (since their main trade historically was itinerant tin-working) "Goldsmith" and "Silversmith" are self-explanatory.

The blacksmith was an invaluable member of the community until the advent of mass-production techniques in the Twentieth Century and is still a substantial figure in less industrialized areas. The smith is often used symbolically to represent mankind's creative abilities and the advances of technology. His tools, the forge, hammer and tongs, and the anvil are rich with metaphorical meaning. Swordsmiths were held in extremely high regard in Japan, to the extent of attributing magical powers to their work: Masamune, it was said, made a sword that would cut everything sinful while not cutting that which was innocent. All of these are reasons the name "Smith" is so common not only in Anglophone countries but also, for example, in Slavic countries, where variations of the word "Kovač" are also one of the most common surnames, and also in Romance language with names such as Ferrari, Lefèvre, Herrera, Ferreira, and Fieraru.

Due to the physical strength needed for pumping the bellows, hammering metal, and enduring the temperature of the forge, most blacksmiths will be depicted as burly fellows; variations of this usually include Stout Strength, female blacksmiths with a Wrench Wench vibe, and smaller smiths with wiry muscle giving them surprising strength. If forced into combat, most fictional blacksmiths can use their hammers to devastating effect, but weaponsmiths will often use the weapons they specialize in making instead. The blacksmith may possibly be related to robot tropes as well in a sort of Technology, Strength, and Intelligence sort of way.

While blacksmiths made many different useful items, in fiction you will generally see them specializing in weapons (especially swords), armor, fetters and chains (usually these smiths are depicted less favorably than other metalworkers) and horseshoes (a specialist in the last is often called a "farrier.") In actual history, bladesmithing and armor making were specialized professions that often had their own guilds, and the process involved a whole workshop of journeymen and apprentices rather than a lone smith at the anvil. The tools and techniques required to make arms or armor were also carefully guarded and not available to the average blacksmith or farrier, who would not be wasting his time making nails or horseshoes if he could instead be making blades or plate armor for higher profits. Blacksmiths could, in a pinch, produce rudimentary weapons and armor to equip a hastily-formed militia: this could involve modifying farm tools such as the mowing scythe and threshing flail to work better as weapons, or beating out helmets that resembled cooking pots. In much fantasy, however, an "ordinary" blacksmith may be able to produce weapons of quality well above what he would realistically be capable of.

Also notable is that historically, contrary to stereotypes, women were regularly involved in the trade. It was still male-dominated BUT several of the disciplines (nails, pins, chains) were almost exclusively women. Women owned blacksmith shops, took apprentices, worked the forge - all of the things that mark them as “real” blacksmiths. One anecdote is from William Hutton’s History of Birmingham; he encountered a nailer’s shop in which he noted “one or more females, stripped of their upper garments, and not overcharged with the lower, wielding the hammer with all the grace of the sex.”

Taken to its fullest extent, the blacksmith becomes the Ultimate Blacksmith: the person responsible for weapon class MacGuffins, he is the person who makes the demon-slaying sword or fixes it or purifies it so it will not consume the user's soul. Makes a weapon that the hero treats as his keepsake or turn the seemingly useless ore into something useful. He prides himself in his work and treats them like children and the wielder as a father.

You can still find blacksmiths working today. These days they tend to make specialist and custom items that are not economic for or require a level of attention to detail incompatible with mass production techniques . Such artisans will produce custom knives, film and theatre props, decorations, custom sized wrought iron gates, weapons and armour for War Reenactors, members of the Society for Creative Anachronism, LARP enthusiasts etc. and farriers are still around working for hunts, the horseracing industry, horse owners and the leisure riding industry.

He will generally be the star of a Forging Scene. A trope with similar connotations, but using a more feminine pursuit, is Sweet Baker.