Weapons of Their Trade 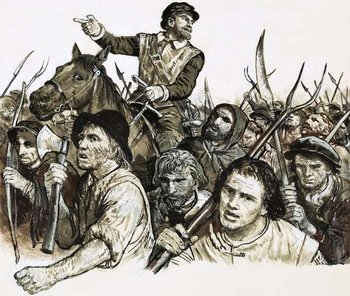 "Although the scythe isn't pre-eminent among the weapons of war, anyone who has been on the wrong end of, say, a peasants' revolt will know that in skilled hands it is fearsome."
Advertisement:

A specific style of Improvised Weapon when a tradesperson uses the tools of their trade as combat weaponry. Iconic tools are preferred, because they demonstrate the character's proficiency with the tool, despite the current use as a weapon. It serves the dual purpose of making the combatant's style unique and reminding the audience what career they're from.

In the real world, most occupations have tools of the trade that are used entirely for utilitarian purposes. In the fictional world, these master craftspeople can wield these tools with deadly force. The firefighter who normally only uses the axe to bash in doors now bashes in skulls. The painter's brush spills blood with every stroke. The mechanic's wrench now breaks ribs. A farmer using their tools such as a pitchfork or scythe to impale enemies rather than pitch hay and reap lives rather than hay, respectively. A construction or demolition worker making use of a handy nearby sledgehammer to hammer in heads. A miner using their pickaxes to pierce bodies rather than stone.

Note that for this trope, "tools" are distinct from "weapons"; a weapon's primary purpose is to hurt people, while a tool intends some mechanical effect. A police club is a weapon, while the handcuffs are tools to restrain. Characters using these tools also count as an Improbable Weapon User.

Inversions (weapons used as tools) would be Improbable Use of a Weapon or Mundane Utility. When characters grab everyday tools (but not tools of their career) to fight with, it's simply Improvised Weapon. For skill with tools acquired as part of a character's backstory, see Chekhov's Hobby and Workplace-Acquired Abilities.

This is a Super-Trope to:

Overlaps with Chef of Iron, a trope about cooks being fighters, even if they don't use their cooking implements to fight.

Compare Superpowered Robot Meter Maids, for when robots who are supposed to be workers are equipped with weapons-grade equipment or have super-powered specs that they can theoretically be used to hurt others easily.