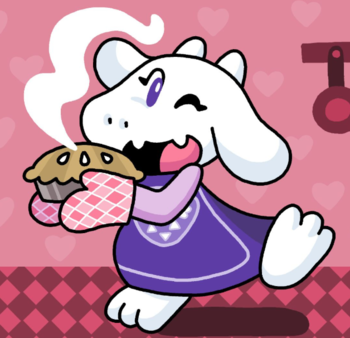 ...How sweet. And so is the motherly goat-woman.
I'm the most sensitive man on God's green earth!
Here's a rose bouquet...
I also baked you some fresh Creme Brulee... "
— Ninja Sex Party, "Why I Cry"
Advertisement:

When people think of baking, they often think of their mother's fresh chocolate chip cookies, warm loaves of bread, and sugary cakes. It's linked to sweets, motherhood, childhood nostalgia, and hard, passionate work. So, it's no wonder that the characters who like to bake are often portrayed to be just as sweet as the food they're making.

Female bakers will be cute and caring; male bakers may be less obviously soft, but will still be kindhearted Nice Guys, and perhaps also strong from all the hard work, but remember that in this case, Real Men Wear Pink. Regardless of gender, they're often portrayed as idealistic, friendly, and passionate about their craft. They're also typically more feminine in nature than they are masculine; after all, Feminine Women Can Cook, so it stands to reason that good bakers are also feminine and may even like to bake because they're feminine.

Often prone to saying things like "the secret ingredient is love", and may also cook with Grandma's Recipe — if they aren't the Granny Classic themselves. They're also typically a Supreme Chef in the field of baking, not just someone with a general interest.

Contrast Angry Chef and Evil Chef. Compare and Contrast with The Blacksmith, who shares this trope's positive connotation and hard-work ethic, but in a more masculine field. See also Through His Stomach.