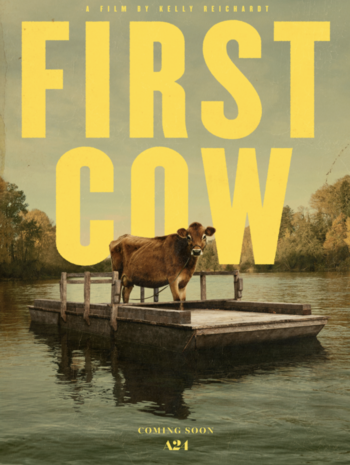 "History isn't here yet. It's coming, but we got here early this time. Maybe this time we can be ready for it. We can take it on our own terms."
— King-Lu
Advertisement:

First Cow is a 2019* The film had a brief festival run before its wide release in 2020. film directed by Kelly Reichardt based on the book The Half Life (No relation) by co-screenwriter Johnathan Raymond.

Otis "Cookie" Figowitz (John Magaro) is a cook traveling in the woods with a group of fur trappers in the North American Pacific Northwest of the 1820s. After befriending a Chinese man, King-Lu (Orion Lee), on his way to a nearby town, the two men learn a wealthy English tradesman has transported the first cow into their region from Europe. Encouraged by King-Lu, Cookie steals milk from the cow at night in order to make a batch of buttermilk biscuits. The two then begin an operation of stealing milk and selling oil cakes to the desperate town deprived of food outside of tasteless soda bread.

The film also features Toby Jones, Ewen Bremner, Gary Farmer, and Scott Shepherd in supporting roles. It saw a brief theatrical release in March 2020 before being pulled from theaters and released on demand due to the COVID-19 Pandemic.