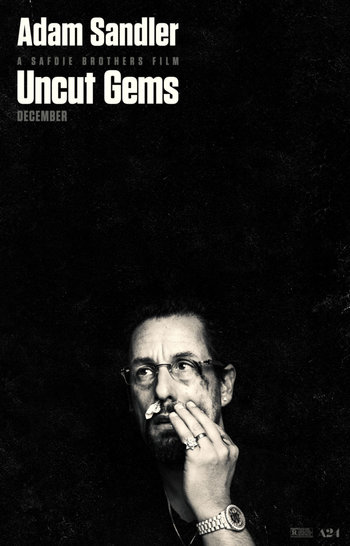 "You’re taking my money, all over town, placing bets!"
"Is it too late? I’m done. It means nothing. It meant nothing. Please, give me another shot."
— Howard Ratner
Advertisement:

Uncut Gems is a 2019 crime thriller film directed by Josh and Benny Safdie, written by them and long-time collaborator Ronald Bronstein. The film stars Adam Sandler, with Lakeith Stanfield, Julia Fox, Idina Menzel, Eric Bogosian, The Weeknd, and Kevin Garnett in supporting roles. The original music for the film was composed by Daniel Lopatin, better known as Oneohtrix Point Never, marking his second score for a Safdies film after Good Time (the music of which was credited to his OPN name).

Taking place in 2012, the film follows Howard Ratner (Sandler), a charismatic New York Diamond District jeweler and gambling addict whose clients are some of the most powerful and wealthy people in the city. When a potential transaction of his goes awry and an old, persistent Loan Shark of his starts swimming straight for him, Howard must make a series of precarious high-stake acts as complications from his family, his creditors, and his clients start to catch up to him in more ways than one.

The film was in the works by the Safdies for more than ten years, primarily due to the lack of financial backing and an attached star. It was released on December 13th, 2019 by distributor A24 in the United States and distributed worldwide by Netflix on January 30th, 2020.

"This is my fucking way. This is how I win."