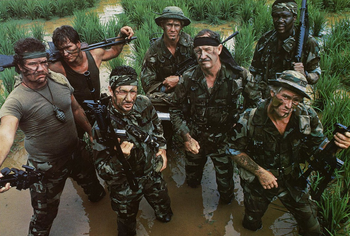 "In the most important mission of their lives, they're going back to get their buddies who were left behind."
Uncommon Valor is a 1983 war film directed by Ted Kotcheff, starring Gene Hackman, Randall "Tex" Cobb, Robert Stack, Reb Brown (yes that Reb Brown), and a post-The Outsiders, pre-Dirty Dancing Patrick Swayze.
Advertisement:

It is The '80s, and Col. Jason Rhodes (Hackman), a Korean war veteran, is haunted by the loss of his son, Frank, who has been Missing In Action since 1972. After a particularly disturbing nightmare, he decided to take action. He petitions the government and all of his military contacts to no avail, eventually being forcibly retired for being a nuisance. What's a Papa Wolf to do? Team up with the father of another MIA, now an oil magnate (Stack) for finances and recruit your son's former squadmates, drill them into a precise military unit with the help of a young Marine Kevin Scott (Swayze), and send them back to the war they've been trying to escape for the last 10 years.

The second half of the film chronicles their arrival in Thailand, scuffles with the CIA (who don't want an armed incursion setting off the delicate political situation), and run-ins with corrupt soldiers, arms dealers, and the final assault on the POW camp in Laos.

Has nothing to do with the Jedi Mind Tricks song, though both of the song and the movie deals with the Vietnam War.