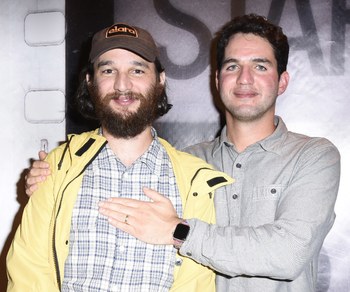 They're going to show you a good time.note Josh on the left, Benny on the right
Advertisement:

While they're both very hands-on on the technical side of their projects, Benny has also stepped in to act in instances such as Good Time and Goldman v Silverman. He's currently slated to co-star with Nathan Fielder in a Showtime comedy The Curse, which he's set to write with Fielder and direct with Josh; he is also set to appear in the Star Wars Disney+ series Obi-Wan Kenobi.

Projects the Safdie brothers have worked on:

The Safdie Brothers and their films provide examples of: