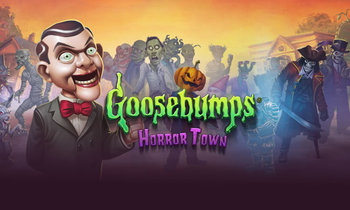 Goosebumps HorrorTown is a village simulator for iOS and Android featuring characters from the Goosebumps series.
Advertisement:

The premise of the game is expanding the city of 'HorrorTown' and its residents which range from inquisitive kids, shady neighbors and actual monsters. Players can gain experience and progress further by having the monsters terrorize the humans and filling in the 'scare-o-meter'.

In 2021, it was announced that updates would be stalled due to Scholastic stepping in after the game wasn't making enough money. It eventually came back for a Halloween event, but apparently it didn't do as well as they hoped, putting the game in limbo. That is until May 2022 when it returned, now focusing more on smaller events.

Gameplay videos of the game can be found here