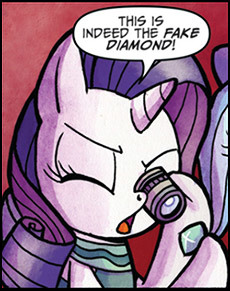 An eye loupe is a small magnifying device worn over the eye to see tiny details closely. It is commonly associated with jewelers, but is used by many other professions, from watchmakers to engineers of small electronics, and for appraisal of precious gems, coins or stamps.

In fiction, someone wearing an eye loupe is used as visual shorthand for several things. If it's a one-shot, never-seen-before character, this immediately tags them as some sort of expert coming to appraise whatever valuable artwork or rarity is at hand.

Otherwise, an established character pulling out one is a sign that they're Crazy-Prepared, or more commonly, Greedy. The Miser Advisor or The Scrooge frequently owns one, ready at all times to appraise the value of anything they grab.

An eye loupe can also show up for quick gags and humorous situations, often in a completely unexpected setting (including anachronistic). A common stereotype is for a woman offered an engagement ring to immediately examine it with a loupe. Or the humor might be in establishing something is very, very small and requires the tool to be seen.