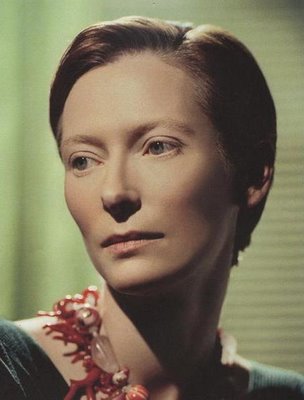 "Usually, with me, the project is always the second thing. The film-maker comes first. Films grow out of the relationship."
Advertisement:

Katherine Matilda "Tilda" Swinton of Kimmerghame (born 5 November 1960) is a British actress of English and Scottish descent. Her family

is one of only three in the entire United Kingdom that is able to trace their land ownership in an unbroken line to before the Norman Conquest of 1066.

She studied social and political science at Cambridge, and joined the Communist Party. After graduating in 1983, she briefly worked in theater before acting in films. Her initial projects were very experimental and artistic, but the last two decades have seen her move to more mainstream films. She lives in Scotland with her partner Sandro Kopp, and her two children (Xavier and Honor) with ex-partner John Byrne (not John Byrne the comic book artist).

Conan O'Brien would like her to play him one day. She's up for it whenever that happens. And a highly popular choice for any biopic of David Bowie that might happen.