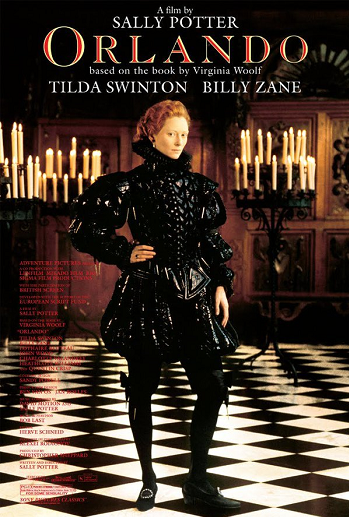 A 1992 film, written and directed by Sally Potter, based on the novel by Virginia Woolf, and chiefly notable for being the movie which made Tilda Swinton into a star.

The film is set between the Elizabethan era and the present day, and follows the career of the title character, played by Swinton, who starts out as a handsome and somewhat androgynous young nobleman. Orlando's beauty gets the attention of the elderly Elizabeth I, who grants him a big house and lots of land on the condition that he doesn't grow old...which Orlando proceeds not to do. He is, however, unlucky in love, falling for a Russian princess who jilts him. By the 17th century, Orlando is as young as ever and is interested in becoming a writer. He shows his verse to cynical poet Nick Greene, who in return suggests that if only Orlando were to set him up with a financial stipend, he could devote himself to being a full-time writer. Greene reads Orlando's poetry and finds it terrible, and publishes a poem ridiculing Orlando. Orlando is humiliated, but tells his people to pay Greene the stipend anyway.

By the 18th century, Orlando is a diplomat who has travelled to Constantinople as the English ambassador. While he's there, he gets caught up in a battle. The next morning, he wakes up in his bed to discover that he's turned into a woman, and is fine with that. Orlando travels back to England to find that her new sex raises a lot of questions about who's going to inherit the house if she's not married, because obviously, she can't; she is also now patronised by the intelligentsia. The film moves on to the 19th century, when a dashing American chap named Shelmerdine (Billy Zane) falls off his horse on Orlando's lawn, breaking his ankle. She takes him in and cares for him, and has her first (and only) satisfying love affair.

We see Orlando as a pregnant nurse, stumbling across a World War One battlefield, and then in the present day, Orlando is a single mother and author, shopping the manuscript of her life story to a publisher (played by the same actor who played Nick Greene). He's interested, this time.

Since the most famous thing about this film is that its title character changes sex, spoilers are unmarked!