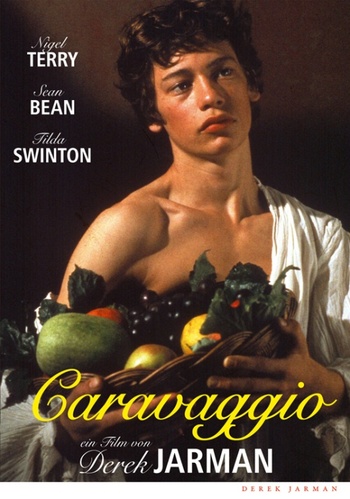 Caravaggio is a 1986 film directed by Derek Jarman.

It's a biopic of Michelangelo Caravaggio

, the famous Italian painter of the late 16th and early 17th centuries. The film gives a rather impressionistic version of his life, showing various scenes and moods rather than following a standard cradle-to-grave biopic format. We see Caravaggio as a teenage hustler who is both painting and seemingly working as a prostitute servicing older men. He comes under the patronage of Cardinal Del Monte (Michael Gough), who takes a professional and probably sexual interest in the young artist.

Cut to Caravaggio as a grown man, played by Nigel Terry. He has become a prominent artist who continues to lead a wild personal life. Into that life enter Ranuccio (Sean Bean), a street fighter, and his girlfriend, a prostitute named Lena (Tilda Swinton). Both Ranuccio and Lena become models for Caravaggio, and romantic jealousies rise up between all three.

Film debuts for both Tilda Swinton and Sean Bean. Robbie Coltrane plays Scipione Borghese, a cardinal who gets the hots for Lena.