Film / The Lion, the Witch, and the Wardrobe 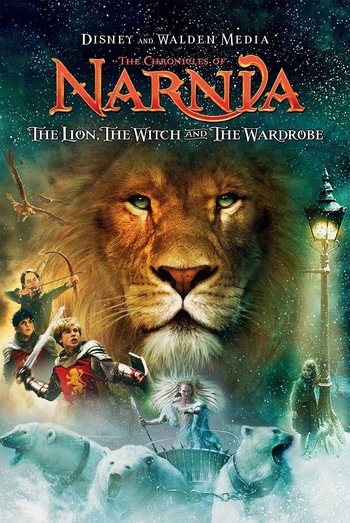 The beloved masterpiece come to life.

Having noted the success of both The Lord of the Rings and Harry Potter movies, Disney and Walden Media decided to take their own crack at a cinematic adaptation of a children's epic fantasy adventure novel. Since the rights to J. R. R. Tolkien's books had already been taken, they instead went with a series by Tolkien's best friend, C. S. Lewis.

The Chronicles of Narnia: The Lion, the Witch and the Wardrobe is the first installment in The Chronicles of Narnia film series. It is based on the first published and second chronological novel in Lewis's The Chronicles of Narnia series, was released in 2005 and directed by Andrew Adamson. William Moseley, Anna Popplewell, Georgie Henley, and Skandar Keynes play Peter, Susan, Lucy and Edmund, four British children evacuated during the Blitz to the countryside, who find a wardrobe that leads to the fantasy world of Narnia. There they ally with the Lion Aslan (voiced by Liam Neeson) against the forces of Jadis, the White Witch (Tilda Swinton). The screenplay based on the novel by C. S. Lewis was written by Stephen McFeely and Christopher Markus.

The Lion, the Witch, and the Wardrobe provides examples of:

Alternative Title(s): The Chronicles Of Narnia The Lion The Witch And The Wardrobe