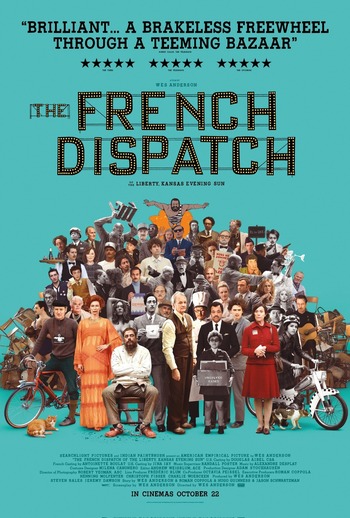 "It began as a holiday..."
"Just try to make it sound like you wrote it that way on purpose."
— Arthur Howitzer Jr.
Advertisement:

The French Dispatch, full title The French Dispatch of the Liberty, Kansas Evening Sun, is a romantic comedy-drama written and directed by Wes Anderson. The film stars Tilda Swinton, Timothée Chalamet, Frances McDormand, Bill Murray, Mathieu Amalric, Jeffrey Wright and Adrien Brody, among many, many others.

An Anthology Film, the plot focuses on three feature stories in the titular paper after the death of editor-in-chief Arthur Howitzer Jr. (Murray). It's introduced by a short segment "The Cycling Reporter," wherein travel writer Herbsaint Sazerac (Owen Wilson) gives a brief tour of 20th-century Ennui-sur-Blasé, the film's fictional French city. The subsequent segments are as follows:

The film is concluded with an epilogue in the form of a eulogy for its late founder.

The French Dispatch is based in part on The New Yorker, with several characters serving as direct Shout Outs to iconic employees and amalgamations to famous journalists in general. Initially delayed by the COVID-19 Pandemic, it had its world premiere at the Cannes Film Festival on July 12, 2021, and was theatrically released on October 22, 2021.

The French Dispatch provides examples of: